Acting St. Bonaventure President Dr. Joseph Zimmer holds the university mace at the start of a Commencement ceremony on Saturday. A poster to the left of the stage remembered Dr. Dennis R. DePerro, former university president who died March 1 of complications from COVID-19.

A heartfelt hug says it all. Health science graduate Casey Decatur of Riverview, Florida, shows her appreciation for Dr. Claire Watson, founding director of public health in the School of Health Professions, at Saturday's Commencement ceremony. 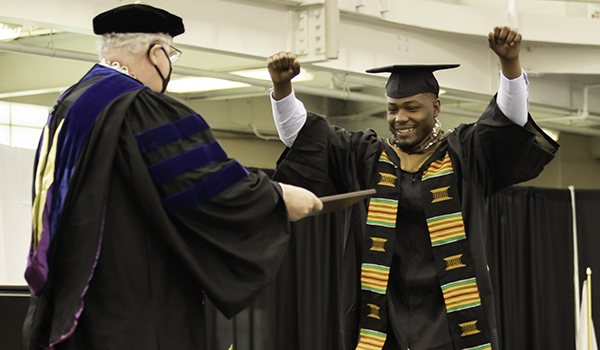 Because of COVID-19 restrictions, the university conducted six ceremonies throughout the course of the day, beginning with graduate school students at 9:30 a.m. and concluding with the School of Health Professions at 3:45 p.m.

“I cannot express enough my gratitude to you and your families for all you have done through the pandemic to persevere and persist through the greatest challenge to the university in anyone’s memory,” Dr. Joseph Zimmer, provost and acting president, told the students.

Photo: Dajour Fisher of Newburgh, New York, raises his arms in triumph as he is handed the diploma for his bachelor's degree in business from Dr.  Zimmer.

For the name of all students awarded degrees Saturday, see our news release. 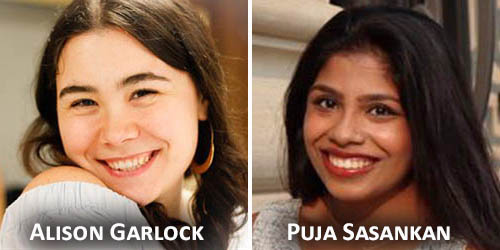 Alison Garlock of East Aurora, New York, and Puja Sasankan of Williamsville, New York, were named Ideal Bonaventure Students for the Class of 2021.

The Ideal Bonaventure Students exemplify the spirit of St. Bonaventure and the ideals of St. Francis through their demonstrated commitment to community service and academic excellence. This highest honor and treasured tradition celebrates the wonderful character of the St. Bonaventure graduate. They are selected by a committee that considers nominations from the campus community.

Justin Cyran of New Fairfield, Connecticut, is accompanied by his parents as he enters Richter Center for the School of Education Commencement Ceremony.

Master of Science in cybersecurity graduate Amanuel Wassie of Alexandria, Virginia, lets his wife, Ferehiwot Teka, wear his cap as they pose for a photo at the university entrance. Both are immigrants from Ethiopia.

Student speakers address the Class of 2021 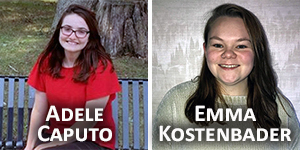 A student speaker traditionally addresses classmates during one Commencement ceremony, but because Commencement was split into a number of individual events, this year two speakers were chosen to speak at events leading up to Commencement.

Caputo, an educational studies and Spanish double major from Manlius, New York, delivered her message to the Class of 2021 at this year’s Candlelight Induction Ceremony on Thursday, May 13.

Kostenbader, an accounting and criminology double major from Bayonne, New Jersey, shared her address with classmates at the senior banquet on Friday. 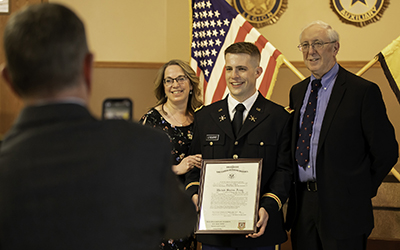 The commissioning ceremony,  held at the Allegany American Legion, was followed by the Silver Dollar Salute, a traditional event in which each newly commissioned officer hands a silver dollar to the first soldier who salutes him. 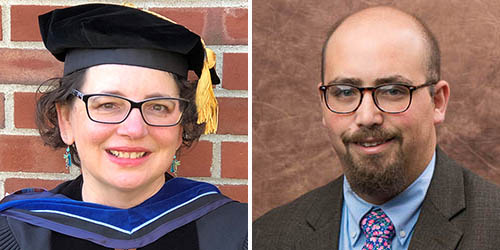 Two St. Bonaventure University faculty members were honored with awards of excellence for the 2020-21 academic year.

Sen. Schumer salutes the Class of 2021

Tell the world you're a proud 2021 Bona grad 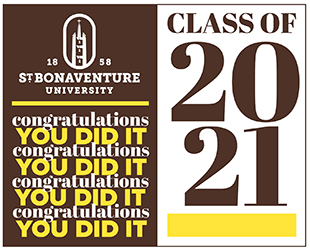 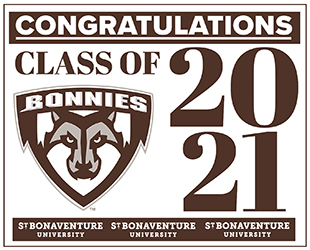 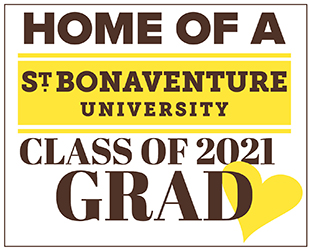 Congratulations! You're among a special group. In the long, proud history of St. Bonaventure University there are few others who have had to face the fear and uncertainty, the restrictions, the frustrations, the isolation and social upheaval that you have endured as you pursued your studies during a global pandemic.

But you did it, and we could not be prouder of you and your fellow graduates. We hope you are just as proud, and to help you show it we've created three designs that you may print for display.

Click on one of the designs above to download a high-resolution PDF that you may print yourself, or send to a printer for creation of a yard sign or other display.