The late Dr. DePerro shares a laugh with students in Hickey Dining Hall. 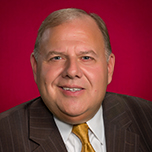 Dennis R. DePerro, Ed.D., was the 21st president of St. Bonaventure University. He took office June 1, 2017, and led the university until his passing from complications associated with COVID-19 on March 1, 2021.

In his three years at St. Bonaventure, Dr. DePerro made great progress to tear down silos, encourage collaboration and open the lines of communication with faculty, students, staff and alumni.

He launched a comprehensive capital campaign to build “A Bolder Bonaventure,” stewarding transformative gifts to help the university’s new School of Health Professions become a reality.

His vision to transform the university inspired him to form a number of campus-based presidential commissions to examine critical issues early on in his presidency, including a group devoted solely to mission integration, reflecting his passionate commitment to create a transformational experience for students rooted in the university’s Franciscan tradition. The university hired a vice president for mission integration in 2019.

In 2020, he reconstituted the Presidential Commission on Diversity, Equity and Inclusion, which is making inroads to improve DEI efforts across campus.

Prior to his appointment at St. Bonaventure, he served as vice president for enrollment management at Le Moyne College in Syracuse for 18 years before becoming the inaugural dean of the School of Graduate and Professional Studies in 2013. He also served as a professor of management in the Madden School of Business.

Dr. DePerro spent his entire 38-year career in college administration; for eight years (1982-1990) in admissions and alumni relations at his alma mater Canisius College, and for five years (1990-1995) as dean of admission and financial aid at Marietta College in Ohio before going to Le Moyne in 1995.

Throughout his career, Dr. DePerro was committed to the accessibility of higher education to traditionally underserved populations, overseeing programs like HEOP, STEP, Upward Bound, Liberty Partnership and the Collegiate Science and Technology Entry Program (CSTEP).

A Buffalo native, Dr. DePerro was one of Le Moyne’s first two participants in the inaugural Ignatian Colleagues Program, a national program developed to strengthen lay leadership through formation and focus on Jesuit mission and vision.

Dr. DePerro held a doctorate in higher education management (2006) from the University of Pennsylvania, a master’s in educational administration and supervision (1988) from Canisius, and a bachelor’s in biology from Canisius (1981). His research focused on integrated marketing and strategic planning in higher education and ultimately contributed to the marketing efforts of several national associations.

He served on a variety of advisory boards, including the Council of Independent Colleges and Universities, the College Board, National Catholic College Admission Association, and the New York State Association of College Admission Counseling, among others. He served on the President’s Council of the Atlantic 10 Athletic Conference, Board of Trustees at Maria College (N.Y.), and previously served on the board of Christian Brothers Academy (Syracuse), Elmcrest Children’s Center, Francis House, and St. Joseph’s College of Nursing (N.Y.). In addition, he was engaged in a number of church and community organizations.

Dr. DePerro’s wife, Sherry, is a vice president at Cadaret, Grant and Co., a national financial advisory firm headquartered in Syracuse. He was the proud father of two sons: Andrew, a 2017 graduate of Providence College and a 2019 graduate of Columbia University, and Matthew, who graduated in 2020 from Providence.

A message to the Bona family

The late Dr. DePerro talks about the challenges at the outset of the COVID-19 pandemic.

Thank you, Bonnies, for your generosity

the late Dr. DePerro expresses his gratitude for our donors' role in helping us top our fundraising goal, even during challenging times